As much as Davido has a lot to celebrate, he does not seem to be able to stay away from controversies. The singer was recently called out by a certain Afolabi Kazeem who claims he (Davido) absconded with his 60 million Naira.

In a lengthy post on social media, the accuser, using the username, @michealkaycee and claims to be a jeweler, detailed how he did business with Davido to the tune of N60 million. In his narrative, he wrote that he met Davido through Davido’s cousin, Chinedu Opute (npz) and B-Red, and they transacted business that involved Davido going to London to finalize the deal.

He stated that after the deal went through, Davido and his cousins pulled a fast one on him as they absconded with the money which he quoted to be worth about 120 thousand pounds (circa N60 Million) . He lamented how he has traced the singer and his cousins to Nigeria and how he reported the case to the Nigerian Police but no effective measure has been taken, according to him. He claimed that Davido instead threatened his life and that of his loved ones. 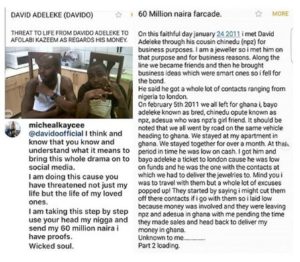 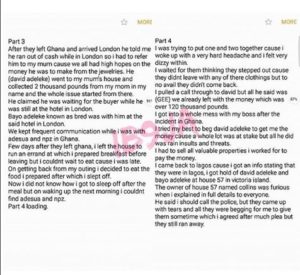 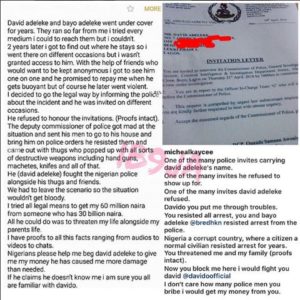