Davido has just achieved an unbelievable feat as his 2017 hit single; “Fall” becomes a major force to reckon with in terms of digital sales all over the world.

Billboard some hours ago, published the five songs that are currently enjoying the biggest digital sales in world music and Davido’s “Fall”” occupies the number 4 position.

Billboard according to the post have revealed “Fall” is the fourth best selling song currently in the world. 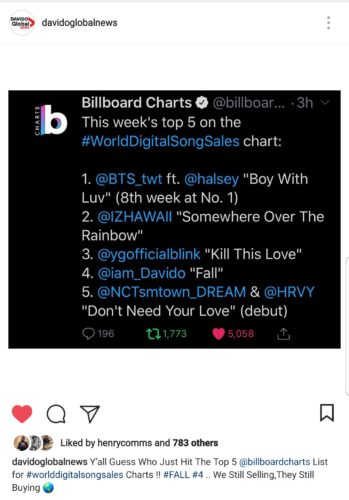 “Fall” was released in June 2017, it became an instant hit in Nigeria and Africa as both the young and old vibed excitedly to its unique sound and simple lyrics.

“Fall” was only recognised as a major hit in Africa until about a year and the half later when it began to gradually pop heavily in America.

It enjoyed and still enjoying massive radio airplays in the US as well as moved up really speedily in the Shazam charts as a lot of people wanted to have it on their mobile devices.

Meanwhile, Davido has also promised that there would be a huge remix for the song.