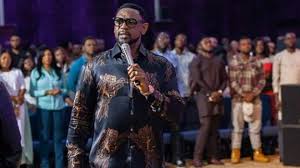 For years now, the name “Coza pastor” or “Gucci preacher” or “Fatoyinbo” has been accompanied by a subservient resentment that sits on the tongue of many Nigerians.

From Ese Walters’ sour testimony about this mans randiness, to his flamboyant lifestyle of swearing never to be caught wearing a non-designer wear, to little whispers about his unfaithfulness to God and his wife and now Busola chose not to talk in hushed tones or parables.

Busola took the center stage and let go. She didn’t only take the bull by the horn. She took the bull to a slaughter house and made sure to slit the throat from the neck and not the chest.

As expected, her truth scattered social media and as usual, camps were taken, vast majority of Nigerians took to various online platforms to register their rage, disgust and wonder.

The people who leaned on the path of wonder didn’t want to believe that a man of God was capable of raping a 17 year old. The wonder soon turned to an unintelligent attempt to discredit the story of the victim by asking “why did she wait so long?” “Where is her proof” “she wants to bring this beautiful man down like potiphar’s wife” and other beautifully constructed sentences of ignorance.

For people who feel that a grown successful woman who has a very beautiful marriage will wake up one morning after decades to accuse a man of raping her, I have nothing to say about your thought process but I have a lot to say about the appearance of Biodun’s name in almost every conversation of rape and randiness.

There’s an Igbo adage that says that if a child is crying and pointing towards a direction, if his father isn’t there, his mother is there.

There is another that says that there is no smoke without a fire.

Let me agree with all these assertions by saying this:

Nigerians may pretend when you say Biodun is not guilty but we will protest if by any chance he claims being innocent.

By reason of age and life’s darts, many of us don’t know what and how innocence works exactly but we are sure that an innocent man wont pay renegades to hold cardboard papers upside down to deflect the effort of concerned people who left their houses to protest. Innocence won’t phone the DSS and implore men who has daughters to go and ward of a protest that is demanding a rapist to step down.

I was sad at the timing of all these. Nigerians have short memory span. Big brother has appeared on the TV now and people’s rage about rape from a religious head is now being substituted by conversations of which house mate has a bigger butt.

Yesterday the youth of this generation led a march with the intent of a revolution and this morning we get the proceeds. For once in the history of this country a protest scratches the surface of success.

Biodun has stepped down this morning because of the pressure.

A journey into the prison begins with a step outside of your safe place which is the church.

If you’re reading this, I implore you to leave the grand foolishness of BBNaija and follow this historic course of sending a sexual predator where he belongs.

He doesn’t belong on a podium where he can still have visual access to the fresh thighs of his members. Regina Daniels Shares Loved Up Photo With Hubby In A Plane