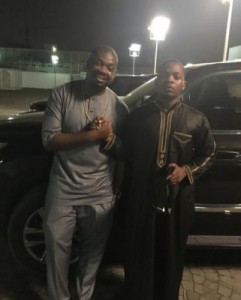 Most people would remember the incident that led to the face-off between Don jazzy and Olamide at the 2015 Headies Awards as an unfortunate one but 2baba remembers it as his most memorable moment at the award ceremony.

During a quick chat with Hip TV, the iconic singer was asked to tell his most memorable moment at the Headies awards and he surprisingly mentioned the moment Olamide took to the Headies stage to throw a subliminal at his perceived competitors at the time.

The incident later escalated to the point of near-confrontation and social media threats to Don Jazzy who during the event, called out Olamide for taking to questioning the choice of Next Rated artiste which was Reekado Banks and not his preferred choice, Lil Kesh. The incident is today remembered as the ‘Reekado Banks-Lil Kesh’ Headies incident but the Olamide-Don Jazzy saga remains unforgotten.

During the short interview, 2Baba recalled the moment of Olamide’s tantrum as his memorable moment at the Headies awards.

HEADIES: @official2baba says the moment @baddosneh lost it on stage is unforgettable for him. #12THHEADIES Drake Responds To His Dad’s Claim That He Lied About His...

Phyno Shares Tracklist For His Forthcoming Album, ‘Deal With It’