Few minutes after his father, Senator Ademola Adeleke declared his intention to contest the September 22 governorship election in the state, Nigerian singer, B-red took to social media to brag about the assertion that he is about to go from being a son of a senator to Governor’s son.

B’red stated that any girl who decline his marriage proposal at this point of his life is nothing but a fool (mumu).

Senator Ademola Adeleke who happens to be Davido’s uncle represents Osun west senatorial district and he declared his intention to contest the September 22 governorship election in the state in a letter written to the Peoples Democratic Party (PDP).

“I posses all it takes to unite leaders and members of our party as well as galvanise the general electorate towards ensuring a resounding victory for the PDP in the forthcoming poll.”

In accordance with the directive of the leadership of our great party, I wish to respectfully express my intent to vie for the ticket of the party as its candidate in the Osun state governorship election holding on the 22nd September 2018.

I am a member of the party in Sagba Abogunde ward 2 of the Ede north local government in the Osun west senatorial district.

As a loyal man from the strongest political base of the PDP in Osun state, I am willing, able and prepared to offer myself for this great service if given the opportunity to fly our flag as the governorship candidate.

I pledge my continuous commitment and support to the stability, growth and success of the PDP at all levels”, he added.

B’red’s father, Senator Adeleke popularly known as ‘dancing senator’ had in 2017 defected from the All Progressives Congress (APC) to the PDP to contest the Osun west senatorial district election.

Bragging about his new status as a potential governor’s son, here is what B’red posted below… 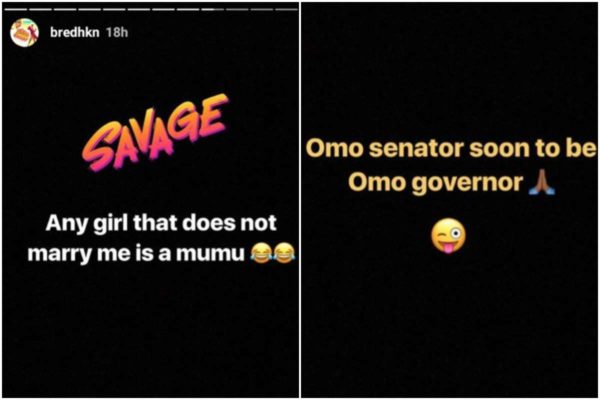 ‘You no get sense’ – Nigerians blast Ubi Franklin for announcing...