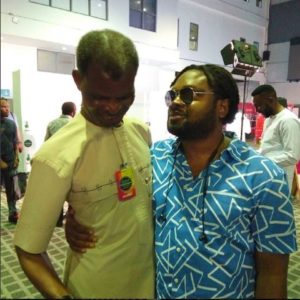 Producer, Cobhams Asuquo had a rare moment with a man he described as his childhood hero, Laolu Akins, at the recently held Nigerian Entertainment Conference (NEC). And the seasoned producer was happy to share their story on Instagram.

Laolu Akins, the iconic producer, produced some of the best Nigerian music of the 80s and 90s, with artistes like Sir Shina Peter and Dele Ayuba. In his active years, his works became a primary source of entertainment for Nigerians while artists like Cobhmas Asuquo drew inspiration from them.

Referring to Laolu Akins in his Instagram post, Cobhams stated that “this man produced some of the biggest soundtracks to my life. It’s a real honour to be standing with him, it’s because of people like this that I became a producer.”

#neclive6 was lit! I also got to meet one of my childhood heroes Laolu Akins… Yes guys, even I get starstruck . From Shina Peters to Adewale Ayuba this man produced some of the biggest soundtracks to my life. It's a real honour to be standing with him, it's because of people like this that I became a producer. . #greatness #starstruck #neclive6 #nec #hero #producer #mentor #fuji