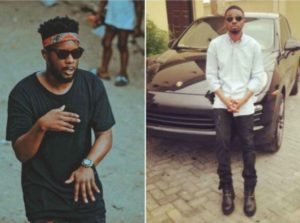 It appears that there’s a brewing war between two of the industry’s famous music producers, Shizzi and Maleek Berry. The two producers who are affiliated to Wizkid Starboy records, have been putting out shady tweets which many believe is an exchange.

Just after the 2018 Headies Awards where Maleek Berry lost the ‘Next Rated’ award to Mayorkun, the Eko Miami singer went on a Twitter rant, dropping subliminal tweets about ‘fake elders’ who speak of unity in the open and go to closed quarters to cause discordance.

If I start to vex and call out names

Sometimes keeping quiet is not the answer always

Hours after Maleek Berry’s Twitter rant, Shizzi put out a tweet that suggests that he is the ‘fake agabaya’, referred to by Maleek Berry. In his response-like tweet, he hinted that Maleek Berry is a ‘fake’ calling out fakes.

Toolz begs husband to follow her back on IG amidst marital...

Watch YCEE talk about EP He Went on A Rant About,...