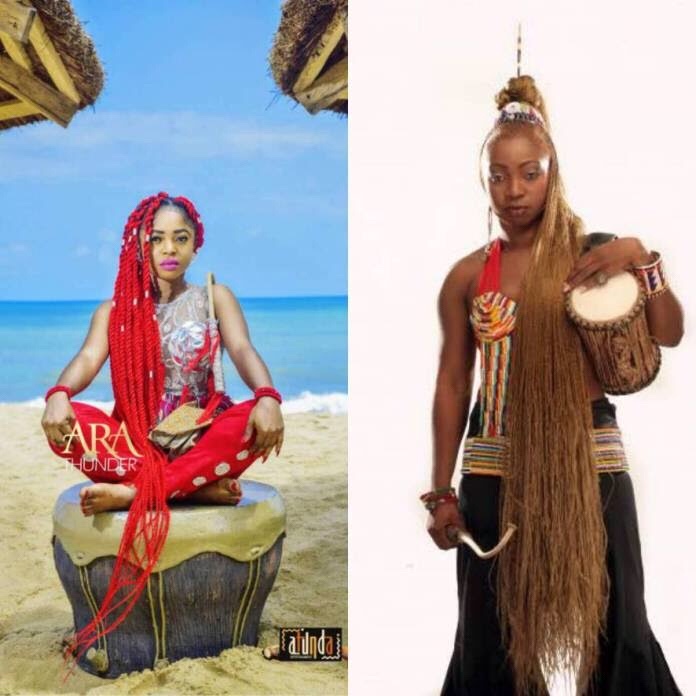 The new kid on the block, ÀRÁ (Thunder), known for her budding talent as Nigeria’s second generation TALKING DRUMMER, has announced her presence on the musical scene with the release of yet another singles, titled, BOJU BOJU, sending signals across the scene that she is here for the long haul and ready to entertain musical bluffs with her unique talent.

Years after, the musical group, which is noted for its proclivity in grooming young talented artistes from cradle to the height of their careers, has churned out another female talking drummer, with the stage name, ÀRÁ meaning Thunder as She literarily exudes lightening on stage with her thunderous performance.

Her stage name ÀRÁ Thunder is an apt reflection of the power behind her sound, the dexterity and energy that comes with her display. She is a very powerful and talented drummer and songstress as well as a committed performer, who is very focused and adept at her trade, which is rare for her age.

Although she started singing and performing at a very tender age and only turned professional in 2014, her debutant effort put a lie to all that due to the maturity and deftness of her performance and control.

The young artiste, who distastes being mistaken for or compared to Ara (wonder), tells you that she is different with her identity and has worked very hard to carve a niche for herself with her strong and powerful renditions as well as the artistic touch that she brings to her act, especially with her youthfulness, energy and vibrancy that are often overwhelming when she takes to the stage really set her apart.

BOJU BOJU speaks about a secret love affair between a couple. Its equalling saying I’m taken so for the men who are interested, BOJU…Close ur eyes.

With this new release produced by Atunda Entertainment and Succi, ÀRÁ, who is very well at home with live performances as she has gone on tour with Atunda Entertainment across the country and other parts of the world, is here to stay and will stop at nothing to get to stardom, which beckons.