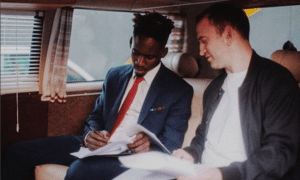 The Pour Me Water singer made the announcement public via his gram page as he shared a short clip of himself signing the deal. They also popped champagne as they drank to a greater partnership.

Eazi also announced that he would be releasing another album dubbed “Lagos To London“, which is scheduled to drop on the 23rd of May, 2018.

He captioned the post; Yesterday in my New Vehicle! As CEO of my Label #BankuMusic i signed a licensing deal with @ColumbiaUK as part of our structural release for the coming music! Everything is almost in place & new single from my upcoming project #LagosToLondon drops 23rd May Jah willing! Thanks for your support!! Together (my fans, my Team & i) will make History #happyBoy. “If You Give Everybody, You’ll Be Broke” – Comedian AY Drops...