Runtown went on to twitter to express his concerns over the recent killings by men identified as members of the Special Anti-Robbery Squad (SARS) of Nigeria.

According to Punch Newspaper, a 39-year-old man Francis Eni was allegedly shot around 8 am on Ajisegiri Street, Ilupeju, Lagos.

Spokesperson of the Lagos State Police Command, Bala Elkana, said the deceased was killed by a cult gang that ambushed officers. Thereby denying all allegations.

Reacting to the recent killing, Runtown stated that Nigeria is becoming a nightmare and not the country of our dreams. 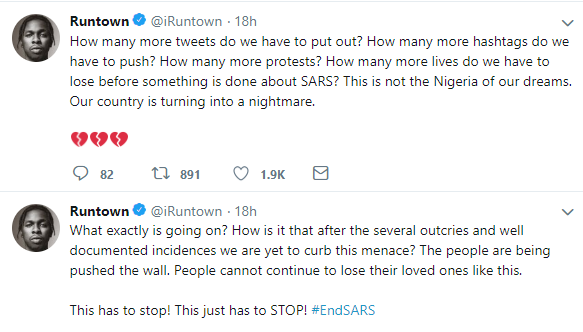