Simi who reacted to a tweet by Candace Owens, a prominent pro-Trump supporter on Nigerians being the most successful ethnic group in the United States, stated that Nigerians go outside to give the magic they can easily bring to their land because even when they try, it doesn’t work.

Candace Owens in her tweets claimed that Nigerians are the most successful ethnic group in the United States, because they were not exposed to victimhood most black Democrats play. She tweeted;

Nigerian-Americans are the most successful ethnic group in the U.S! If you want to know how it’s possible that blacks who come from under-developed Africa, keep outperforming blacks from over privileged America— it’s bc they weren’t exposed to the Democrat parasite of victimhood!

Simi in response to the tweet, said it was ‘bittersweet’ because Nigerians are capable of surmounting any challenge and just need an opportunity to show this. The ‘Joromi’ crooner also dropped an advice for those who break the law, because ‘nothing’ is working in the country. She wrote;

Mannnn! I just saw these tweets and it was bittersweet for me ?. Imagine the magic we could do in this country if it were conducive. If electricity was stable. If the health sector was reliable. If public education was up to standard, etc… We Nigerians go outside and give out the magic we could so easily bestow on our own land because even when u try to work it here, it doesn’t work. Doctors, creatives, tech people, entrepreneurs…etc. We’re capable – we just need a chance to show it.

I wish with all my heart the leaders would put Nigeria and the people first. Not their greed, nor their thirst for power. Imagine, just imagine actually making this country work and having ur children grow up proud they were born to people that care enough to make a difference for everyone – not just for themselves. Imagine foreigners being desperate to come to Nigeria because it’s incredible.

Also bloggers, you need to do better men. Most Nigerians go to you for ALL of their Nigerian news and most of what you have to offer is the pain, the bad, the evil, the chaos. People come to u and practically everything u have to say is depressing. Everyone else sells their country so well, we wanna run there – but we drag our country in the mud so well, nobody sees anything good in us.

Also the people, everything has been difficult and frustrating so long, you’re becoming the thing you detest. We don’t even try anymore. We’re just as bad. Break the law cos you can. You steal cos you can. No one understands that all we have is us. And when we lose that, we have nothing left. There’ll always be stupid people – but you definitely don’t have to be one of them.

Do better. Think bigger. Money, fame, power, likes, talent, traffic is not everything. It only lasts as long as people are paying attention. Do better. ?? 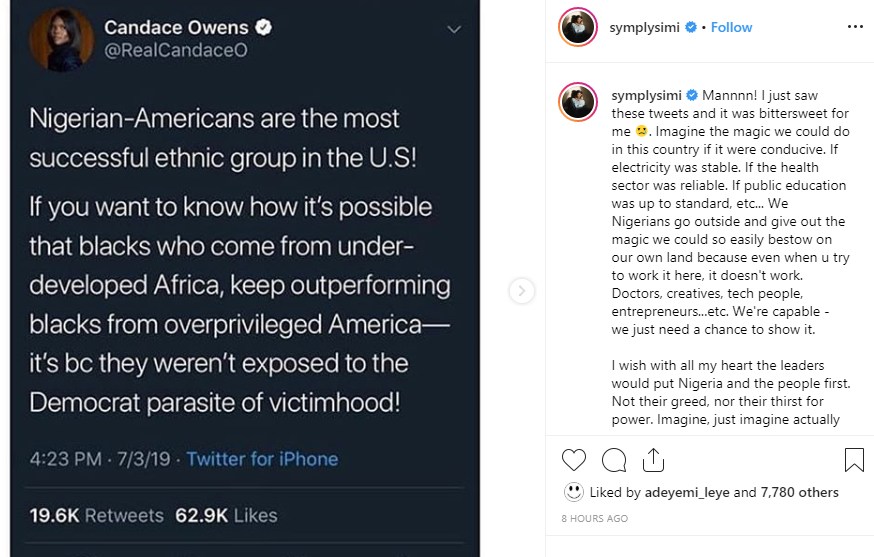 It should however be noted that Candace Owens has been described as anti-black, even with her tweet about Nigerians. She has been accused of pitching blacks against blacks, for white politicians to have their way.