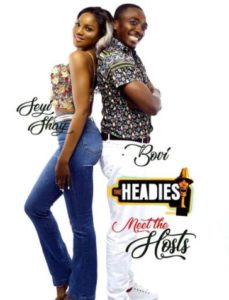 The organisers of the prestigious Headies Awards have finally announced the hosts of the 12th edition of the event. It was announced on Instagram that the two hosts for this year’s Headies are; singer Seyi Shay and comedian Bovi Ugboma.

The Headies organisers have finally put together the necessary elements to hold the prestigious event after been earlier forced to make adjustments to the schedule of the event. The annual award ceremony is now set to hold on the 5th of May 2018 at Eko Hotel & Suites and the list of nominees has been announced.

The first rate award ceremony  failed to hold at the tail end of last year, like most of the previous editions of the event, instead it was announced that the event would hold on the 24th of March, 2018 before it was moved to the new date following complications in securing the venue of the event.

Fans of Nigerian music and professionals in the industry have started to make plans ahead of the due date of the major event. It is expected to be another historic night that would see music excellence and creativity rewarded as the hosts, Bovi and Seyi Shay, guide the audience through the event. I use your gender better than you – Bobrisky tells women...