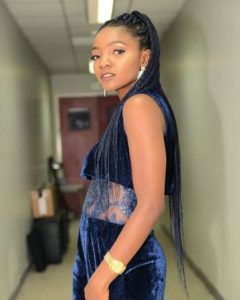 Simi is in a hot mess according to legendary singer, Sir Victor Uwaifo. The 77 year old singer accused the X3M music singer of using elements of his 90s’ classic, Joromi, to make her 2017 hit song which bears a similar title. Sir Uwaifo threatened to legal actions against Simi over the issue.

During an interview with Sahara TV, Sir Victor Uwaifo explained that he owns the right to the name ‘Joromi’ because he created it. He stated that Joromi is his original idea, contrary to the popular opinion that it was extracted from the cultural books of Edo natives. He described it as a ‘franchise’ that has been trademarked.

Sir Uwaifo stated that Simi committed a punishable offence by using the name and some of the elements of his song without seeking his permission. He said, ‘Simi is in trouble’ and went on to hint that he is planning to take legal actions against the songstress.