Daddy Showkey has reacted to the arrest of Naira Marley by the Economic and Financial Crimes Commission, EFCC.

The veteran Nigerian singer said he hadn’t reacted to it initially because he cannot endorse a small child (Naira Marley) insulting an elder (Ruggedman), especially when the elder is right.

He added that he believes Naira Marley made the disrespectful comments under the influence of a substance he smoked.

He went on to say that he lived a dangerous life on the streets as a young man but that doesn’t mean he will advise his child or any young person to live the same way and make the same mistakes he made.

He ended by pleading with the authorities to free Naira and just caution him so he can see his recent arrest as a lesson. 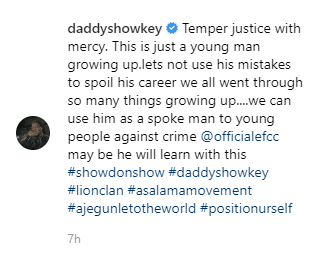 Temper justice with mercy. This is just a young man growing up.lets not use his mistakes to spoil his career we all went through so many things growing up….we can use him as a spoke man to young people against crime @officialefcc may be he will learn with this #showdonshow #daddyshowkey #lionclan #asalamamovement #ajegunletotheworld #positionurself