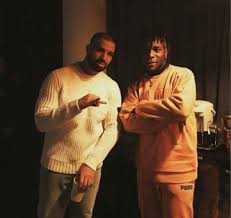 Nigerian Reggae-dancehall artiste, Burna Boy, submitted 5 songs to Drake for the Canadian rapper’s More Life project, Pulse NG reports. Burna Boy made this revelation during the listening party for his forthcoming album titled “Outside.” It was at the event which held on Sunday January 21st, 2017 at the We´re´ House in Lagos, that the singer revealed how he met with Drake in London and how their meeting led to them working on the project Drake was working on at the time, which turned out to be an album titled “More Life.”Burna Boy spoke on how he worked hard to make materials for the projects. He said,

“I worked on 5 new songs for the project, and submitted them all.”

Burna Boy revealed that he got confirmation from Drake and his team that one of the songs he wrote named “More Life” would make it to the project but it came out in a different form on the album and it even went on to be the title of the entire album. Sadly, Burna Boy did not get the deserved credit for writing the song that went on to become so huge that it made the top of the Billboard Hot 200 album chart and broke streaming charts.

Burna Boy would later feature on the outro of the album ‘Get it together’, which was a remake of South African DJ, Black Coffee, and Bucie’s 2010 single Superman. The new version had UK singer Jorja Smith, singing about fixing a strained relationship. Burna Boy’s More life was reworked and sampled at the outro of the record in an almost unrecognisable form.

“They told me they had picked it, but when the song came out it was…chopped..” Burna Boy said.

Burna Boy however said he has moved on from that episode and stated that the original version of the More Life song he wrote would be on his forthcoming album “Outside,” which is set for release on January 26th, 2018.