Simi has joined other Nigerians in reacting to Pastor Chris Oyakhilome’s comment of ‘husband meaning master’, which was passed off in a video which went viral yesterday.

We reported earlier that the Loveworld Ministries a.k.a Christ Embassy Founder, had made the comment while revealing that ‘woman was not God’s original idea’.

Reacting to the comment which has sparked controversy, Simi in her tweet insinuated that Pastor Chris was weaponizing the Bible. The singer also had some questions for those who are desperate to be seen as “masters”. Read her tweets below; 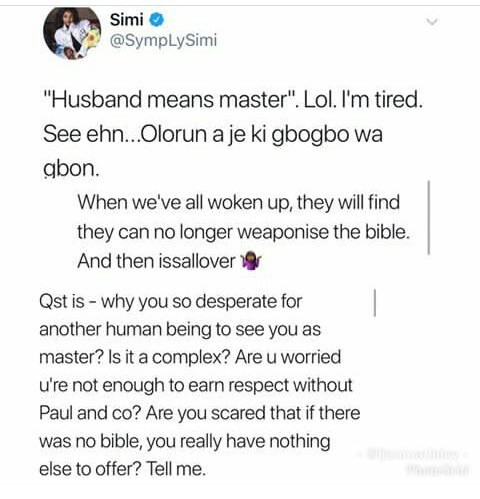 Revealed!!! Wizkid Does Not Have Any Picture With His 2nd Son;...

Watch Davido Dress As A Shark For His Daughter’s Birthday Party...

Wizkid & Slimcase Collaboration In The Works?

Zlatan’s Song, Legwork Is Bigger Than Headies 2019, Wizkid Agrees To...

It’s All About That Black Magic With Yemi Alade As She...